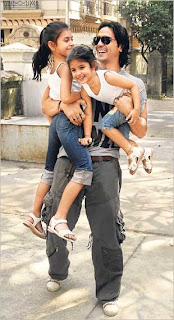 On Children’s day, Arjun Rampal talks to Shubha Shetty-Saha about the two ‘miracles’ of his life —daughters Mahikaa and Myra

Mahikaa (6) and Myra (3) obviously have two totally different personalities — while Mahikaa is more subdued and graceful, Myra is vivacious and naughty. Doting papa Arjun says, “That’s the nicest part. Both have their own personalities. They are similar in many ways but are completely individualistic. They have strong tastes…”

It is also obvious that papa spoils the daughters. Arjun says sheepishly, “Yeah, I spoil them rotten perhaps because of the kind of schedule I have…”

Though as celebrity parents, Arjun and wife Mehr (Jessia) did find it a little difficult to give them a normal life, Arjun says that they try and be as normal at home.

“Mahikaa did ask us a lot of questions earlier. At one point of time, my hair was longer than Mehr’s and Mahikaa asked me why I have long hair when all her friends’ parents have short hair? But otherwise they have adapted very well to our professions and lifestyle.”

Arjun says his daughters’ arrival has totally changed his life. “I look at them as these little miracles, gifts from God. After their arrival, we have become more selfless. It’s amazing how you can feel unconditional love for someone. It is a very spiritual experience. Once you get children, you realise what your parents must be feeling for you and your equation with your parents also changes for the better,” he says.

There is something about his own childhood that Arjun wants to instill in his children’s lives.

“I feel very upset that today’s children don’t have much of outdoor activities. I make it a point to take them outdoors and encourage them to take part in different kind of sports.

Sport was an integral part of my childhood and that was the most fun part. It taught me how to be competitive and also how to lose gracefully. That’s one thing I try to teach my children — be competitive but know where to draw the line,” he says.

Arjun tries to spend a lot of time with the girls, “You can never have enough time with your kids. But at the same time I believe that we should not spend too much time with them. You should just let them be,” he says.

Arjun and Mehr are, like most other parents, careful about how they behave in front of their daughters. Arjun says, “Children are like sponges. They are watching you all the time. Sometimes you see them behaving in a particular manner, and suddenly you think, wow, I need to change that about myself!” he says with a smile.

There is something else that the couple is most particular about. “I think the worst thing to do is put fear in a child. I never stop them when they are attempting to jump from somewhere or are trying out something new. Even if they get hurt, they will learn it the hard way and will know next time how to do it better. That makes them independent…”
But right now, the girls have made a driver out of Arjun forcing him to take them on a ride on their flashy red bike!
Posted by SZri at 1:43 PM