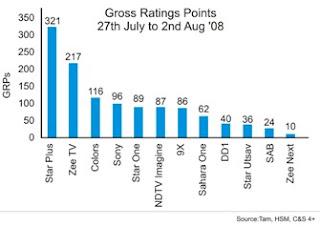 MUMBAI: It has scored a century on debut, probably the only general entertainment channel to achieve that distinction in recent times. Colors, the Network 18-Viacom promoted GEC has generated GRPs of 116 GRPs (gross rating points), in its first full week (Tam, week 31; 27 July-2 August, HSM, C&S 4+) of launch catapulting it to the the No 3 position (The channel launched on 21 July and it generated 81 GRPs in that week which was for five and a half days - hence not a full week - of telecast.)

Apparently, Colors CEO Rajesh Kamat’s “disruptive and differentiated” programming, accompanied by an aggressive marketing (outdoor, online, television and cable TV placement campaign) has succeeded in attracting viewers. From the very beginning, Kamat was confident of his plans, he had shared his launch plans with Indiantelevision.com as “We are launching with a canon and not a pistol.”
The credit of high-ratings also goes to distribution, which Colors claims has touched 44.5 million viewers

The big winner for the channel is its Akshay Kumar hosted, Fear Factor-Khatron Ke Khiladi which clocked a TVR of 2.73 this week with its average TVR being 2.55. Balika Vadhu registered a 1.48 TVR (the average being 1.36), Jai Shree Krishna rang up a 1.46 TVR with its average touching 1.06 for the week.

Tam data reveals that the channel has attracted viewers of all hues and colours and age groups. 32 per cent of its GRPs were contributed by the 35+ age group audience, while the 15-24 years demographic totted up 31 per cent.
Additionally, both men and women are watching the channel almost equally with females 4+ contributing 53 per cent of the GRPs, and males 4+ the remainder.
Show wise, Fear Factor, logged in 53 per cent viewing from males with females accounting for 47 per cent. Balika Vadhu and Jai Shree Krishna are being watched more by women (66 per cent and 55 per cent respectively).
Media planners agree that the channel has created ripples and is a hot property. Says Madison Media Group CEO Punitha Arumugum, “The channel has generated interest among viewers with its interesting content. Though I feel Fear Factor – Khataron Ke Khiladi would have done better after all the promotion.”

Lodestar Universal CEO Shashi Sinha adds, “Colors is a good entry in the GEC space, and it is also getting a good response. Though, these properties build over time and it is too early to say anything.”
Colors also has announced that it will run Bigg Boss2 seven days a week at 10 pm. Sinha asserts that, “seven days airing will be a good option for advertisers, with regular content.”
Arumugum agrees saying, “It (Bigg Boss2) will reduce the monotony of television viewing.
What' happening to the rest of the channels? Star Plus leads with 321 GRPs, followed by Zee TV's 217 GRPs. Sony Entertainment Television (SET) has slumped to fourth position having lost three GRPs to drop to 96. Star One, NDTV Imagine and 9X are neck-on-neck with 89, 87 and 86 GRPs respectively
Posted by SZri at 10:54 AM