Mktg - Beware!Virgin is keeping a watch on you 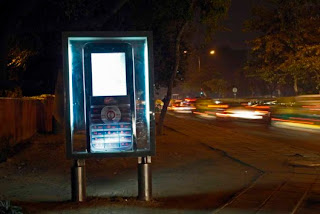 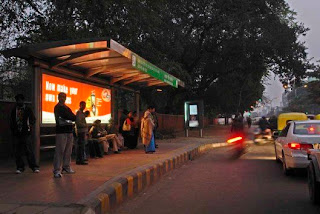 Outdoor has been an integral part of Virgin Mobile's campaign since its launch in March 2008. Two months ago, it relaunched its mobile handset, vKewl, with a new pricing. The message was to be conveyed to its target group (TG) – youngsters in the age group of 18-25 years. To accomplish this, the company has launched a novel outdoor campaign in Delhi.

The vKewl mobile comes with features such as video recording, a 1.3 mega pixel camera, FM radio, colour screen, MP3 player, speaker phone and headset – all for Rs 3,499. The outdoor innovation aims to grab the attention of its TG, convey the multiple features of the mobile and continue the brand's philosophy of 'Think Hatke'.


At a bus shelter close to Dayal Singh College in New Delhi, a CCTV camera has been fitted strategically to capture the expressions and actions of passers by.

Close to the shelter, an MUPI (multi photon ionisation) unit has been placed, which resembles the handset. Instead of the handset's static screen, the MUPI display has a 32 inch plasma screen. The footage captured by the CCTV is played simultaneously on the plasma screen, leaving the audience pleasantly surprised and sometimes embarrassed. The front panel of the shelter has the proposition from Virgin Mobile: 'Now make your own moves'.

Another innovation has a large 3D replica of the vKewl mobile mounted on a billboard at the Ashram flyover in New Delhi, with an LED screen fitted at the back. The screen runs candid viral videos for some quick and light-hearted entertainment.

The outdoor campaign has been ideated and executed by Bates 141.


Prasad Narasimhan, chief marketing officer, Virgin Mobiles, says, “For us, Delhi is a growing priority market and was thus ideal for unique, innovative communication. Also, thanks to its high student population, which is our core TG, it was a preferred place for this campaign.”

He adds, “We also saw a need for feature-rich handsets amongst the youth, especially camera and video recording. Our new handset comes equipped with the video recording feature and is positioned on this plank.”

The CCTV innovation was supposed to be executed in Mumbai as well, but could not be because of some regulatory issues.

The outdoor campaign is supported by television. Both 25 and 35 second ad spots have been aired across youth oriented channels such as MTV, Zoom, HBO and STAR Movies, along with a mix of general entertainment channels and news channels, including Colors, Sony, IBN7 and SET Max.

An innovative online campaign has been initiated to highlight the video recording feature. The shoot at sight microsite engages users by prompting them to shoot their own viral content, upload it and share it with friends. The campaign will be supported by a special application for the social networking site, Facebook, and an innovative banner ad campaign aimed at driving and generating traffic to the microsite.
Posted by SZri at 6:05 PM