Lifestyle - Banning pants with offensive phrases on the Bum 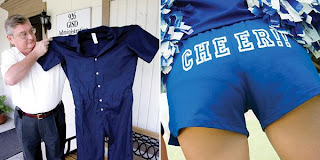 Remember a few years ago, when everyone got upset because teens were sporting shorts and sweatpants with the word JUICY (or worse) across their backsides? And remember how when you were a kid, you could get a necklace or a tiny license plate with your name on it at the mall? Well, those two fabulous ideas have converged to become the oh-so-highbrow Boyfriend Bum Lettered Shorts (not the official name). This fashion breakthrough allows young women to walk around with phrases like MIKE'S ASS or TIM'S ASS written on their bums. Classy, no?
A conscientious parent might worry that young girls will think it's OK for some guy named Tim to own a part of their bodies and to refer to it with a word usually preceded by the phrase "a piece of." It's not likely that the folks who make clothing with words on the bum consider such issues, of course, but if you're über-optimistic, you might give them the benefit of the doubt and assume that they're making a kind of postfeminist effort to turn sexism on its, uh, rear.
The strip of seat-of-the-pants real estate turns out to be pretty valuable. In April, Juicy Couture, the Liz Claiborne-owned company that first put the word JUICY on the posterior, filed suit in a Manhattan court against Victoria's Secret, claiming the lingerie purveyor had stolen their packaging strategies and their classic butt-writing idea and used it in their PINK line of clothing. Juicy has asked that all the offending clothes be destroyed and wants triple damages—three times the profits Victoria's Secret made through its alleged idea-pilfering. In a statement, Juicy called its velour sweats with Victorian lettering on the backside a "collegiate preppy look." (Are you listening, Yale?)
placeAd2(commercialNode,'bigbox',false,'')
Collegiate or not, the concept of bum lettering has spread across university campuses. Even at Smith College, the alma mater of feminist icon Betty Friedan, SMITH adorns the backsides of some of the brightest women in America. Of course, for those who attend a school with a two-word name, there's a shallower concern than abandoning the principles of feminism. After all, nothing is more upsetting than finding that after a few months of dorm food, your BRYN is now a foot away from your MAWR.
Mothers of college girls may have already given up the fight against the branding of their daughters' bottoms (that is, if they're not branded themselves), but there's hope for concerned parents of middle- and high-school kids. Fall is here, and schools across the country have been rolling out an increasingly strict array of dress codes. Districts are adopting bans on shorts and sweatpants with phrases on the bum, as well as a whole range of other fashion statements.
Much of what's forbidden is old hat: no droopy pants, no visible thongs, no obscenity. But this year, schools in North Carolina's Catawba County are banning anything with a logo or lettering, even if doesn't sound dirty. Yes, that includes (gasp!) Abercrombie and Fitch. Other schools found it easier to list what is allowed than what isn't. The Detroit school system's dress code forbids shirts in anything but five colors … if you count white and black as colors: "All students shall wear white, blue, black, yellow or pink."

One Lexington, Ky., private school's rules are so complicated that any kid who can master them should automatically win an academic scholarship to the college of her choice. Here's just one small, cryptic section:
On Fridays we will keep with the current traditions for special dress. That would be dress-up for Lower and Middle School students. The rules about "solid color" do not apply in any division on Fridays. Special dress day will be a Friday only occurrence. Fridays that precede school vacations of at least a week will not be dress-up days, nor will Fridays that are half days. The three exceptions are the day of our holiday concert, Grandparents' Day, and the day of the Candle Lighting Ceremony. These will be dress-up days. Preschool is exempt from the Candle Lighting Ceremony dress-up day. They do not attend.
But the mother of all school dress codes just debuted in Gonzales, Texas, 60 miles southeast of Austin. Students who are inappropriately dressed in that district have a choice of going to detention or donning a school-supplied, genuine inmate-made, prison-style denim jumpsuit and going back to class.The introduction of the jumpsuits caused such a kerfuffle at a recent school board meeting that the police had to be called in to calm a small pack of irate parents. Gonzales Independent School District Superintendent Vic Salazar says objecting parents were in the minority and that the first few days of school have gone off with only minor infractions.
placeAd2(commercialNode,'bigbox',false,'')
As to bum-lettering, Salazar says that there won't any of that at his schools this year—because so much text on shirts has become provocative, the district instituted a ban this year on letters or pictures of any kind anywhere on clothing worn by kids in grades five through 12 (abstract lines and circles are OK).
"Last year, I saw a junior [girl] whose T shirt said THESE TOOLS ARE FOR BEDTIME," he says. "I don't think these girls realize what effect they're having when they wear these things. We're just trying to protect them." (The district also mandates that boys may not wear earrings or grow their hair below their earlobes.)
But teenagers are nothing if not innovative. Already the talk around Gonzales is that the kids might start wearing the denim jumpsuits just for fun. And if that happens, you know it won't be long before questionable phrases start appearing on the backsides of those, too.
Posted by SZri at 8:45 AM