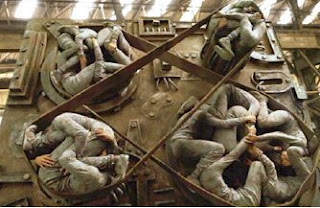 C hakka duniya ka ghoome sadhu sant bole, saare bole — aadmi machine bana haule haule (The wheel of life keeps rotating, so say the saints — man is slowly turning into a machine). So goes the line in the Himani Fast Relief ointment advertisement, what is touted as the most expensive campaign of the Emami group.
This Himani Fast Relief’s new ad campaign that went on air in the second week of August is its first non-celebrity advertisement.
The hustle and bustle of life has converted man into a physical machine. The hectic pace gives an individual very little time to recoup. In such a situation people look for quick solutions. The new advertisement campaign has been quite successful in capturing this particular aspect of today’s life.
The ad starts with a city coming to life in the morning. It then goes on to show a number of men grouping together to form human machines such as a bus, a car and other vehicles.

They also work as machines in factories. As the day reaches dusk the human crane starts coming down signifying the tiring day’s chores in the urban life.
The next shot shows a man falling out of the human bus with shoulder pain. He then takes out the Himani Fast Relief ointment tube from his pocket and rubs it on his shoulder for quick relief from pain.
The ad ends as he gets back in the human bus, which starts rolling again — signifying that life moves on!
“The ad is based on the premise that all machines have to go through some downtime,” says Aditya Agarwal, Director, Emami Group of Companies. It took about six months for the film to take final shape. About 350 people — mainly dancers and ‘malkhamb’ performers — were trained to perform in the ad film. They were trained for around four months, only to complete the shoot in as much as 10 days.
According to Agarwal, there was a huge risk involved in making this ad. “There is a possibility that it turns out to be a marvel, but it is also possible that a customer might not understand what we are trying to convey through this ad.
Having said that, we are happy that we have been able to make this ad visually different that anyone would want to take a second look at it,” he said.
“Typically, an ad goes on air within 30-45 days from the day the ad shoot begins. In this particular case, we finalised the script sometime in January and it took us about six months to prepare the ad. Finally, it went on air in the second week of August,” says Manish Goenka, Director, Emami Group of Companies.
The budget for the campaign was about Rs 1.8 crore. Ram Madhwani of Equinox Films directed the ad and Prasanna Sankhe and Ashish Khazanchi, National Creative Directors at Publicis Ambience, conceptualised the theme for the campaign. The music was given by Bollywood composers Vishal-Shekhar.
“We have received a good response from people on this campaign. The final proof of the success of the ad can, however, be deduced only after a month when we see the impact on the sales,” Madhwani adds. The tone of voice of the background singer has also been selected keeping the day-to-day activities in mind, he informs.
“From the technical point of view the ad campaign is absolutely stunning,” says ad film maker Prahalad Kakkar. “It is very well executed and imaginative, but we need to see how many people can relate to it,” he adds.
So, has Himani Fast Relief, which was always known for celebrity endorsements and other such themes, changed its strategy? Agarwal clarifies, “We have not moved away from celebrity endorsements.
In fact, this campaign will be followed by another campaign with Amitabh Bachchan endorsing the brand.” The ad campaign is expected to be launched in another 10-15 days and will run simultaneously with the present ad film, he adds.
The company expects the present ad film to attract a lot of consumer interest and then plans to follow it up with Bachchan simplifying the theme of the ad.
“The ad film has done wonders on the technical front. But some consumers might find it difficult to understand the product properly because of their knowledge and awareness level.
This is the reason why we plan to follow it up with Bachchan’s ad in order to simplify things and to reach out to our target customers,” says Agarwal.
Posted by SZri at 9:40 PM