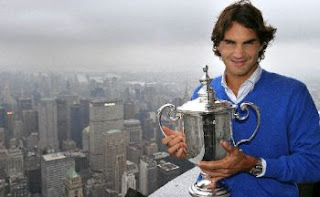 Roger Federer’s nose should have started growing when he claimed he had nothing to prove at the U.S. Open. Of course, he did. All athletes do. If you compete, you are in effect proving yourself. If you have nothing left to prove you’re either dead or retired.
If you’re older, if you’re in a gentle slump, if you’ve got a body of work behind you, you almost have more to prove. Not your greatness, your character. That we know. But your athletic relevance.
Kumble, Tendulkar, Dravid and Laxman have manufactured enough deeds to merit their own chapters in cricketing encyclopaedias, but when Australia comes calling, they’ll be on trial. Are you still better than the next man wanting your place, is your technique still sound? In that sense, sport is about questions, and Federer answered beautifully.
Federer, like Tendulkar once, was such improbably good friends with greatness that he was due a mortal moment. Then it came. This year instead of his usual three slams a year he went three slams without a win. Questions about his vincibility were not impertinent but necessary.
Andy Roddick argued Federer’s year had been just fine, so did Andy Murray. They were being respectful to Federer, but they also, inadvertently, told us why they are not Federer. They might be satisfied with two grand slam finals and a semifinal (prior to the Open), but Federer is not. This man exists on a planet where they have no visiting rights. He makes history for a living.Relief
He has now reached at least the semifinals of his last 18 grand slams. Pete Sampras’ best streak of grand slam semis (or better) in a row was three. When Federer won, relief was on his face and in his words.
“I would have been disappointed losing today and having three finals and one semis of Slams. You feel like you missed an entire year, being so close but yet so far, because semis and finals don’t help me a whole lot anymore in my career. It’s all about the wins, and that’s why this is huge. This is massive, really.”
He had offered proof that Sampras was within reach still, that younger men had not completely solved him yet, that one slam can affect two years. It has turned 2008 from a decent year into a fine year; it has meant he enters 2009 with “great spirits”.
Some might claim Federer’s victory is insufficient proof for Rafael Nadal was not there. Some will insist his aura has returned, proof being the discomfort of Andy Murray. The Brit is usually tactically agile and geometrically sound, but in the final resembled a tennis Pythagoras who had forgotten his theorem.
Some will find proof of Federer’s return in his firing forehand. Some in his sustained aggressiveness. Some in his fluent feet. At his best, Federer was part-Bolt, part-Baryshnikov, but illness in January made him occasionally seem like a man with fetters on.Moving better
As Federer confessed: “I didn’t feel like I was moving all that great for the last couple of months. And I think here, I started to feel like I was moving better and better. That also gave me a lot of confidence being able to know I could play defence and offence. Because sometimes I just had the feeling I had to play offence because my defence was just not acceptable in my standpoint.”
Federer cannot stop moving because time abruptly runs out on all champions. He is closer to his last slam, as Tendulkar is to his last century. It’s why the Open mattered: it was the greatest player ever’s proof that his time has not yet come.
Posted by SZri at 1:15 PM

This is truth of we are public figures we have to show the face to the U.S and also to the reporters, I'm totally agree with you about it.