Business - The holiday e-retail satisfaction rankings are in 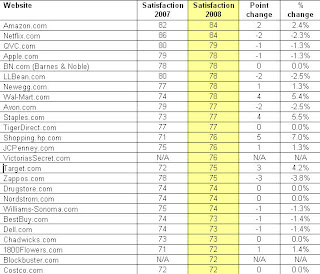 With the nation on edge, you might assume that every Internet retailer worth their salt would have extended red carpet treatment to shoppers during the traditional end-of-year shopping rush.

In fact, more than one-third of the 40 online merchants surveyed in a report on retail satisfaction finished with lower scores than they did during the same period a year ago.

Still, the annual report from Foresee Results found that scores for most of the 40 online retailers it tracks remained the same while one-fourth registered improvements from 2007.

"Holding flat was a pleasant surprise," said Larry Freed, the company's president and CEO. "Obviously, the economic pressures and price concerns were on peoples' minds. But this bodes well after we get past this economic bump in the road and the economy improves."

Amazon and Netflix turned out to be favorites with online shoppers during the holidays, finishing first and second, respectively in the rankings.

Freed noted that higher customer satisfaction ratings often translates into loyalty and purchase intent. Of the 40 websites, who were rated on a 100-point scale, only Amazon and Netflix finished with scores above 80. More than a quarter scored 70 or below, and almost 40 percent saw their satisfaction rankings drop year-over-year.

Beyond the raw numbers, however, no single aspect of customer satisfaction applied across the board as a measure of overall satisfaction. In some cases it was price, in other circumstances the range of merchandise or the functionality of the Web site held sway.

One other takeaway from the report is clear: Despite the strong performance turned in by Amazon and Netflix, the previous gap no longer separates so-called brick-and-mortar outfits, which migrated to the Web, from pure-play Internet retailers.

"Up until a couple of years ago, the pure plays led the way and the multichannel players trailed by significant margins," Freed said. "But they've since closed the gap."

(The following is a partial list of the rankings. You can find the full report on the Foresee Results Web site.)
Posted by SZri at 11:46 AM