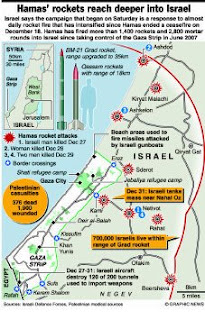 DUBAI: Wary of a ceasefire, a top Hamas leader in Gaza has spelled out tough conditions for a truce with Israel.

“First, the Zionist [Israeli] aggression must end without any conditions... Second the siege must be lifted and all the crossings must be opened because the siege is the source of all of Gaza’s problems,” said Hamas leader Ismail Haniyeh in a televised address.

Mr. Haniyeh said once these conditions were met “it will be possible to talk on all issues without any exception.”

France had recently proposed a 48-hour “humanitarian ceasefire” and there are other ideas for a truce which are on the table.

The Palestinian leader made these remarks amid a heated debate in the Israeli government on the pros and cons of launching a ground offensive against Gaza. Israeli daily Haaretz reported that the military had “recommended a major, but relatively short-term, ground offensive in the Gaza Strip on Wednesday, as military preparations continued on the border.”

It added that the “army was given the green light” to go ahead with the operation.

In Lebanon, Hezbollah leader, Hassan Nasrallah made three observations on the situation in Gaza during a televised address on Wednesday.

First, Hamas had absorbed the air strikes, and this has set up the next stage of the war. “The Palestinian resistance has managed to force hundreds of thousands of Israeli settlers into shelters and shut down universities and factories.”

On Thursday, a Grad rocket fired by Palestinians scored a direct hit on an eight-storey apartment building in Ashdod, nearly 40 km from the Gaza border. More than 20 rockets have landed inside southern Israel on Thursday.

The Hizbollah leader said Israel was hesitating to launch a ground offensive against Gaza.

“I can’t say whether Israel will launch a ground operation or not. Yet, it is clear until this moment that the Israelis are hesitant.” He cited the coming elections in Israel, where the ruling combine would suffer a major blow in case of a military setback in Gaza.

Mr. Nasrallah also observed that in case a land attack by Israel is launched, Hamas would triumph provided “resistance fighters persist as our fighters [in Lebanon] did [in July-August 2006].”

Meanwhile, Hamas has intensified its “psychological operations” by sending text messages to Israeli mobile phone users that they will be targeted with rockets in case Hamas is attacked by ground troops.

The Popular Resistance Committees (PRC) spokesman Abu Abir said: “Telephone messages and breaching the enemy’s radio frequencies are just some of the surprises we have for the Israeli side. You will be very surprised by our military and technological capabilities.”
Posted by SZri at 12:49 PM