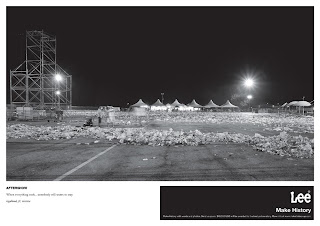 The denim brand, Lee, is off advertising for a while now, all due to the ‘Make History’ campaign.

The campaign began last year in Italy. Since then, it has spread to various parts of Europe. This year, Lee announced the Asian phase of the campaign. Apart from India, ‘Make History’ will be launched in countries such as Malaysia, Indonesia and the Philippines.

The objective of the communication is to create a platform for the brand. “The purpose of ‘Make History’ is to build communities and bring likeminded people together,” says Vipul Mathur, head, marketing, Lee.


Vipul Mathur
The 'Make History' campaign is a photo story contest, in which contestants have to click a photo, give it a caption and upload it on www.makehistory-ap.com. The winning entry will be awarded US$40,000.

Some of the best picture stories, as the bank of photos from the Asian region grows, will be run as part of the campaigns in various media, under the 'Make History' banner.

The list of rules suggests that entries will not be accepted for China. Due to the restrictions in that country with regard to the prize money, a separate website has been created for China. But that won't keep the Chinese away from the initiative in any way.

Talking about it from the contest point of view, as many might see it, Mathur clarifies that this one is not a quick-in and quick-out affair. The purpose is to build momentum for the campaign across the globe, build interactivity with the target group from all over the world and bring them together.

The initiative is not simply a photography contest, but a photo story one, explains Mathur. “The brand was launched in different countries at different times, and with a different positioning in each country. For bringing about uniformity in what the brand offers, till now, it has been about using the same fabric, the same fixtures and the same designs for the brand across the world. But 'Make History' is about bringing uniformity in communication,” he says.

“It is the first time that a brand has tried to break the conventional rules of advertising in such a manner, where there is no product exposure,” Mathur says.

Only shortlisted entries, which will be selected by an international jury, will be part of the campaign.

Talking about the media mix, digital is a first mover media that the brand plans to utilise to give a push to the campaign. Applications on networking sites, mobile media and banner advertising will be part of the digital advertising route.

Among conventional media, Mathur says they are yet to decide amongst television, print and outdoor. He states that the media will be used carefully, as per the needs of regional markets and the media habits of the people in different markets.
Posted by SZri at 1:39 PM