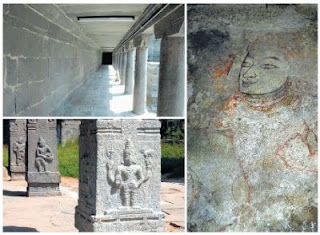 EFFACED LEGACY: (Clockwise from top left): The prakara wall of the Vyagrapurisvara temple at Tiruppulivanam sans its frescoes that were sandblasted recently; one of the Chola frescoes as it existed, in a file image provided by the Archaeological Survey of India; pillars with sculptures at the temple, also sandblasted and disfigured.

CHENNAI: A 1,200-year-old Siva temple of the Pallava period at Tiruppulivanam village in Kanchipuram district, Tamil Nadu, has been wiped clean of its beautiful Chola-period paintings. The frescoes, about 975 years old, have been sand-blasted out of existence.

Ironically, at a seminar organised on the temple premises on August 27, 2007, archaeologists, epigraphists and artists had decided on measures to preserve the paintings and inscriptions in the temple.

Two 16-pillared mantapas are among the temple’s treasures that have been destroyed. One of the mantapas, which was commonly called ‘madapalli’ or kitchen, had Tamil inscriptions dating back to Kulotunga Chola III (1215 A.D.), the Telugu Chola Vijayakanda Gopaladeva, Rajanarayana Sambuvaraya and others. The other mantapa, called Alankara Mantapa, belonged to the 16th century Vijayanagara period.

This destruction has taken place during “renovation” that the Hindu Religious and Charitable Endowments (HR and CE) Department officials are undertaking. As part of this exercise, they plan to pull down a 100-pillared mantapa just outside the temple and “rebuild it.”

The Vyagrapurisvara temple at Tiruppulivanam, near Uttraramerur, 95 km from Chennai, was one of the three temples in Tamil Nadu where Chola paintings existed. The others where they still exist are the Brihadeesvara temple in Thanjavur and the Vijayalaya Cholisvara temple near Pudukottai.


When this correspondent and a photographer visited the temple on November 2, an earthmover was piling up the dismembered granite slabs of the Alankara Mantapa.

In the main temple itself, sandblasting had been done on the southern, northern and western walls of the prakara, on the sculptures on pillars and on the ancient Tamil inscriptions — in violation of a State government directive against sandblasting for renovating temples. The inscriptions on the outer wall of the sanctum sanctorum and the sculptures stand disfigured.

The temple existed during the reign of the Pallava king Nandivarman II in the 8th century A.D. The Rashtrakuta king Krishna III, the Chola kings Parantaka I, Rajendra I and Kulotunga I, the Sambuvaraya chieftain Rajanarayana and the Vijayanagara rulers added structures to it.

What stood out were the Chola frescoes, painted perhaps during the rule of Rajendra I, on the northern prakara wall. Dr. A. Padmavathy, retired Senior Epigraphist, Tamil Nadu Archaeology Department, said the paintings were of Siva as Tripurantaka (riding a chariot and armed with a bow and arrows to kill the demons of the three worlds) and Nataraja, and of Dakshinamurti, Narasimha, and Vishnu in “ananthasayana” posture. There were murals of Raja Raja Chola’s teacher Karuvur Thevar and of princes, princesses, dancing girls, ponds with lily and lotus flowers and wild animals. These frescoes do not exist today. The mantapas, one with ancient inscriptions, are gone.

When contacted, the temple’s executive officer, S. Senthil Kumar, of the HR & CE Department, said that “no paintings ever existed in the temple” and “no structure called Alankara Mantapa ever existed.”

He added that the ‘madapalli’ mantapa was demolished long before he took charge of the temple eight months ago. He said that “no sandblasting was ever done” and that only “water-wash and air-wash” were done.

However, informed sources asserted that the frescoes were sandblasted four months ago, the ‘madapalli’ mantapa demolished about six months ago and the Alankara Mantapa brought down a year ago.
Posted by SZri at 12:20 PM