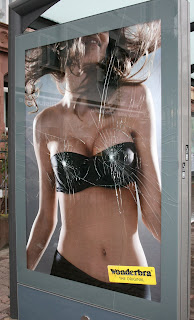 LONDON: Ladies, get ready for the GenNext undergarments! Leading lingerie chain Wonderbra has produced a poster illustrating its new bras not only give a nice lift but also a push-up hard enough to even "shatter" glass.

The advertisement shows a female model sporting a Wonderbra and her breasts smashing through the glass of a bus stand -- the striking poster has appeared at various sites across Germany, 'The Daily Telegraph' reported.
The poster, published by the leading British daily, appears at first sight to be a victim of vandalism rather than a marketing stunt. It is the work of the Frankfurt branch of leading international advertising agency Publicis.

Wonderbra has had a reputation for eye-catching advertising ever since supermodel Eva Herzigov posed in the firm's lingerie next to the slogan "Hello Boys" for a campaign in the 1990s.
Last year the company scored a viral Internet hit with a risque spoof of the cult Cadbury's drumming gorilla advert.
The Wonderbra version featured the enthusiastic and energetic musical efforts of a scantily clad brunette whose upper-body stability was only maintained -- thanks to just her brassire.
However, the advertisement, which had the catchline "Two cups full of joy", was never broadcast on television.
Wonderbra's other recent advertising gimmicks include painting a yellow strip in front of genuine safety lines at Singapore underground stations, to show the safe distance at which Wonderbra wearers will have to stand from the trains.
Posted by SZri at 9:20 AM