World - As it gets hotter,plant migrate uphill 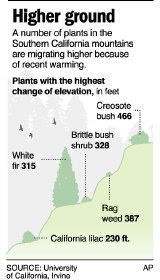 Within 30 years, most had moved to elevations 200 feet (60 metres) above their previous growth range. The findings provide a glimpse of what could happen to the world’s vegetation as the Earth faces inevitable global warming.

Scientists have long warned that human-caused climate change threatens to turn plants into refugees as they migrate to higher, cooler spots to survive. The latest study is the first to measure changes in plants’ locations in connection with regional warming — whether man-made or part of a normal cycle — over the past three decades. “The speed [of the plant movement] is alarming,” said ecologist Travis Huxman of the University of Arizona.However, at least one expert suggested that prolonged drought — not climate change — could be the cause of the die-off and migration. Researchers from the University of California, Irvine, in 2006 studied the 10 most common plant species in the Santa Rosa Mountains east of Los Angeles at different elevations. They recorded the type of plant every 400 feet (120 metres) from sea level to over 8,000 feet (2,450 metres), and compared the distribution to a survey that was done in the same area in 1977.

The Santa Rosa Mountains host diverse habitats, including conifer forest, chaparral, woodland and desert scrub. Since the 1970s, the region has seen average temperatures rise by 1 degree Celsius as well as extended periods of drought. To scientists’ surprise, they found scores of dead trees and shrubs at lower altitudes, but flourishing plants uphill. The habitats of nine of the 10 plant species studied crept an average 213 feet (65 metres) up the mountain face.

“The plant death was striking, and occurred in most species,” said study co-author Michael Goulden, adding: “The occurrence of plant death was obvious to everyone living in that area.”

The results appear in the journal Proceedings of the National Academy of Sciences. The findings counter the idea that fast-growing grasses are more flighty than large woody trees since the various plant species edged a similar distance upward in the study, said scientists.

U.S. Geological Survey research scientist Jon Keeley said the study provides convincing evidence of plant migration. But he said another factor, prolonged drought, rather than rising temperatures may be the driver behind the move. Mr. Goulden concurred that the 1999-02 severe drought could be partly blamed for killing plants, but he said drought alone cannot explain the uphill movement. — AP
Posted by SZri at 9:00 AM