Lifestyle - Rising in Dubai;Tall & getting Taller 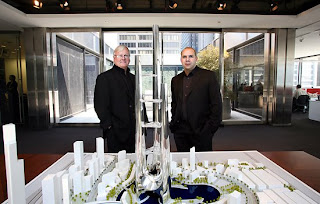 Just over a year ago the office, hotel and condo tower known as the Burj Dubai became the tallest building in the world. But when its developer, Emaar Properties, announced that the Burj had surpassed the 509-meter Taipei 101 Tower in Taiwan, it refused to say how much higher the building would go. That set off a guessing game among architects and developers who follow the tall buildings equivalent of the arms race. A spire that is being built inside the tower has yet to be unveiled, according to Emaar, which hopes to keep the guessing - and marketing - game going until the building opens next year.


But in Chicago, Adrian Smith, the building's lead designer, says that the Burj Dubai is already "in the past." He predicts that a taller building will surpass it within five years. And when the Burj Dubai cedes the title, it may well be to another building by Smith, a blond bear of a man whose firm, Adrian Smith & Gordon Gill Architecture, has made a specialty of designing "supertall" buildings, some as high as the Empire State Building and the Chrysler Building put together.

Already he is designing six other buildings more than 330 meters (about 2,000 feet) tall in the United Arab Emirates, including a futuristic three-pronged tower with so many curving surfaces that it required technology created for Frank Gehry.

Thanks to his oil-rich clients Smith has the chance to create mammoth landmarks that will long outlive him; the risk is that these buildings, which are freed from nearly all stylistic constraints, will look ridiculous, like alien spacecraft that landed in the middle of the desert.

At 63, Smith is performing this high-wire act while building a big architecture firm essentially from scratch. When he led the team that created the Burj Dubai, he was part of the Chicago office of Skidmore, Owings & Merrill, the blue-chip firm behind many of the world's most famous skyscrapers, from Lever House in New York to the Sears and Hancock buildings in Chicago to the pagodalike Jin Mao Tower in Shanghai.

But after 39 years at Skidmore, including a stint as chief executive from 1993 to 1995, Smith left in 2006 to start a competing firm. That set off a struggle over bragging rights to the Burj.

Emaar lists Smith as the building's architect on its promotional materials. "They were buying Adrian Smith as a brand," said Carol Willis, director of the Skyscraper Museum in Manhattan. She described Smith as "a true artist." But when her museum, which occupies a space that Skidmore designed pro bono, organized a lecture series on the Burj, Smith was not included. (William F. Baker, a structural engineer from Skidmore, was the keynote speaker.)

Smith concedes that years of acrimony preceded his departure from Skidmore. But ultimately, he said, he left because the firm requires partners to retire at 65, and he was not ready to stop designing.

Today his Chicago firm is working on two dozen projects. The one closest to home is a proposed retrofit of the Sears Tower, a Skidmore landmark just a few blocks from his office. Smith is investigating ways to reduce energy and water use with a new glass skin and new mechanical systems.

Otherwise nearly all of the firm's work is in the United Arab Emirates. As for his clients' penchant for supertall buildings, he said it is less about egomania than real estate savvy, a way of creating value in the middle of the desert. Emaar, he said, may never make money on the Burj, but it will profit from all of the buildings that surround it - including at least three by Smith. The developer has already commissioned Smith to design three condo buildings with views of the Burj.

Like many architects, Smith - who collaborates with his partner Gordon Gill on all of the firm's designs - is fond of saying that he wants to make buildings responsive to their context. That can be a problem in the Emirates: most of the time, he concedes, there is no context, at least in the form of surrounding buildings, to respond to.

As a result he has turned to a larger context. He explains the buildings' architectural features as responses to geography, geology and climate and is consumed by the notion of making supertall buildings "green."

Hauling vast amounts of steel and concrete into the desert to create an edifice that needs to be heated, air-conditioned and supplied with huge amounts of water hardly seems eco-friendly.

But Smith casts those projects as an opportunity for environmental innovation. Several of the towers he is designing have wind turbines that can take advantage of their elevation - winds are stronger at high altitudes than near the ground - to generate electricity. And cool air surrounding the top of a supertall building can be pumped to the lower levels, reducing the load on the air-conditioning.

Many of the buildings Smith is working on will be double walled, meaning that a gap of 20 centimeters, or 8 inches, or more between layers of glass will allow heated air to be directed toward the outside of the building in the summer or toward the inside in winter.

One of Smith's projects, the centerpiece of a development in Abu Dhabi called Masdar City, will have double walls as well as wind turbines and photovoltaic panels, which can convert sunlight into electricity.

But there is a risk that the green features will be more about good intentions than about results. Chris Twinn, a director of the energy sustainability team at Arup, the London global engineering firm, said that a wind turbine "may be worth its weight in gold" in terms of drawing attention to alternative energy sources, but that it "certainly doesn't generate a significant amount of the energy the building uses." As for solar energy, he said, it would take vast arrays of photovoltaic panels to power a supertall building in Dubai because of its reliance on air conditioning.

Twinn said that the only thing inherently green about a skyscraper is that it permits high-density development, which can encourage the use of public transportation. But that benefit diminishes, he said, when a building goes supertall, since the abundance of elevators and other mechanicals takes up a lot of usable floor space.

And then there's the possibility that the building won't serve much of a purpose in the first place. Smith isn't clear on who will be filling his towers in the Middle East.

Smith started work at Skidmore while still a student at the University of Illinois, Chicago. In later years he designed Modernist towers, most of them for corporate clients in Chicago, Europe and the Middle East. But around the time he made partner at Skidmore, in 1980, architecture was entering its Postmodernist period, when historical detailing was de rigueur.

One of his largest buildings for Skidmore, the AT&T headquarters in Chicago, completed in 1989, is a perfect illustration, from the huge bronze lanterns over the entrances to the granite in Art Deco-inspired patterns in the lobby.

Walking through that lobby on a recent afternoon Smith said that, viewed in hindsight, the building "related too much to the past." But he is not regretful: "Each building becomes a part of who you are."

As Postmodernism petered out, Smith returned to designing glass-and-steel buildings that were sleek but often bland.

An exception is Skidmore's Jin Mao Tower, which resembles a glittering stack of pagodas. But even as Jin Mao was rising on the Shanghai skyline, becoming the tallest building in China upon its completion in 1998, Smith's influence at the firm was waning.

The decision to leave was a hard one, he said, since he could only continue to design large buildings if he had a large staff. He and Gill, then a young associate partner at Skidmore, and a third partner, Robert Forest, invested over $3 million in the new firm, Smith said.

Many of their employees work on the top floor of a 1957 building in Chicago's central business district that has all the hallmarks of exuberant postwar corporate Modernism - walls of dark green marble, aluminum-sheathed columns and gurgling bronze fountains.

It is classic Skidmore, Owings & Merrill. That Smith's offices would occupy a space designed by the firm he left, and now competes with, isn't a coincidence.

"I like S.O.M.'s stuff," he said, explaining why he chose the space. He also liked its location, in the center of the city's business district, known as the Loop, surrounded by important buildings from the 19th and 20th centuries. They are a constant reminder, he said, of his desire to create an urban fabric.
Posted by SZri at 1:15 PM

I am often to blogging and i really appreciate your content. The article has really peaks my interest Yacht charter dubai