Health - Your Chow,momos could be making you obese 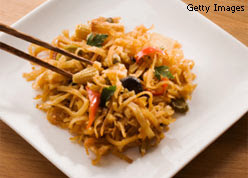 Washington: People who use monosodium glutamate or MSG to spice up their food are more likely to be overweight than others, though their physical activity and calorie intake are similar.
Researchers at the University of North Carolina (UNC) and in China studied more than 750 Chinese men and women, aged between 40 and 59, in three villages in north and south China.
The majority of participants prepared their meals at home without commercially processed foods. About 82 percent of them used MSG. They were divided into three groups, based on the quantity of MSG they used. The third who used the most MSG were nearly three times more likely to be overweight than non-users.
"Animal studies have indicated for years that MSG might be associated with weight gain," said Ka He, assistant professor of nutrition and epidemiology at UNC School of Public Health. "Ours is the first study to show a link between MSG use and weight in humans."
Because MSG is used as a flavour enhancer in many processed foods, studying its potential effect on humans has been difficult. He and his colleagues chose participants living in Chinese villages because they used very little commercially processed food, but many regularly used MSG in food preparation.
"We found that prevalence of overweight was significantly higher in MSG users than in non-users," He said. "We saw this risk even when we controlled for physical activity, total calorie intake and other possible explanations for the difference in body mass. The positive associations between MSG intake and overweight were consistent with data from animal studies."
As the percentage of overweight and obese people around the world continues to increase, finding clues to the cause could be very important, he said.
"The US Food and Drug Administration and other health organisations around the world have concluded that MSG is safe," he said, "but the question remains - is it healthy?"
The study was published this month in the journal Obesity
Posted by SZri at 6:21 PM