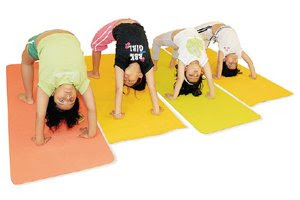 Sarika Bansal has her fingers crossed. Her son, Ronak, attended his first yoga session at Mini Thapar Shastri’s Om Yoga Studio in New Delhi on a recent Saturday morning and she hopes he will go back. The 11-year-old, who is in his school’s soccer team and even plays golf, agreed to yoga lessons only because they will help him become a better sportsman. “Soccer has not made Ronak’s body flexible and agile, or given him more stamina and a better sense of focus — all of which I think yoga can,” says Bansal, who practises yoga

At the recently opened Yoga Sutra in Mumbai, instructor Shradha Sitalvad combines Hindi and English limericks, basic poses and creative storytelling to get children to twist, turn and arch in her class called Yoga Bunnies. “Although children’s bodies are not completely developed to do complicated poses, the basic asanas make them flexible and if done regularly, can help them concentrate,” says Sitalvad.
Yoga classes for children are growing in number in most cities with parents realizing that yoga can equip children with lasting tools for personal well-being. Yoga institutes, in turn, are getting creative and having fun with children. Prana Yoga, a new yoga studio in Mumbai, has started year-round classes for children. Bijal Joshi, who used to teach yoga at three fitness venues in the city before opening this, found that many parents wanted to enrol their children for yoga sessions just before exams to deal with stress.
Watching little ones at Om Yoga Studio twist, groan and grimace helps one understand why children initially resist yoga classes. “Unlike dance or sports, which are ‘fun’ activities, children view yoga with trepidation until they try it out,” says Shastri, who has been conducting classes for children for almost five years in Delhi

According to her, it takes at least four or five sessions before children begin to enjoy yoga. “At the start, if too much emphasis is laid on the correctness of postures and breathing techniques , children lose interest.” So, Shastri, trained in the Ashtanga school, worked around rigid techniques to make them friendly for the 8-14 age group. “Children can’t appreciate that yoga is not just a physical exercise, but a way of life,” she says. That’s why she tells her students what each asana can do, fuses stories with asanas and pranayam, and also makes sure that the sequence of the asanas is fluid. “There are no abrupt changes in postures and stances. And everytime something new is thrown in to keep them interested

Shastri’s book, Yoga for Children, (co-authored by Neesha Singh), is used as the primer for a 10-day yoga workshop conducted at the Mindbody Zone in Bangalore during the school holiday seasons to introduce kids to yoga.
In the last few years, many schools in New Delhi, Mumbai, Bangalore and other cities have made yoga a part of the curriculum. But Shaleen Parekh, owner of Yoga Sutra, believes that schools, to some extent, are responsible for turning children off yoga. “Most school instructors teach yoga in unimaginative ways. Children are made to do the same postures over and over again in a rigid, textbook-like format,” she says.
Older, established institutes that teach one particular form of yoga (such as the Iyengar Yogashraya in Mumbai that teaches only the asanas formulated by B.K.S. Iyengar) are yet to incorporate children as regular members in their institutes unless they require therapy for physical ailments. But that hasn’t stopped newer, more experimental teachers from tapping into the possibility that yoga can be fun, and to ensure that children get a taste of this age-old Indian discipline early on, to embrace it fully when they grow up.
Posted by SZri at 3:44 PM

Yoga is an excellent exercise for kids.. this helps them concentrate in their studies too..