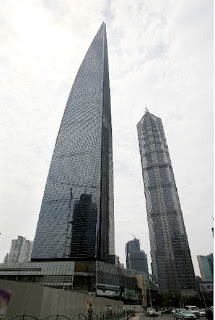 SHANGHAI: China’s tallest building, the 101-floor, 1,614-feet Shanghai World Financial Centre, opens its doors to the public on Saturday, more than 14 years after construction began.
The building’s Japanese developers, the Mori Building Company, pumped in more than 8 billion yuan ($ 1.2 billion) into the project, hoping to make it the world’s tallest building. But delays in the course of construction, including those following a fire on the 40th floor last August, enabled two newer projects to surpass it – the Burj in Dubai, which is still under construction and now stands at 1,800 feet (its final height is being kept secret), and the Taipei 101 in Taiwan.
The newest addition to Shanghai’s skyline may only be the third tallest building in the world, but boasts other records. One of these is a swimming pool at the highest elevation, way up on the 85th floor. Then there is the highest point in the world where a person can stand – an observation deck on the 100th floor that provides a stunning view of the city. The building will house the world’s highest hotel – the Park Hyatt, located between the 79th and 93rd floors.
Shanghai’s skyline is not short of distinctive skyscrapers. The Oriental Pearl Tower, the home of China’s state television channel CCTV, has for many years been the symbol of Shanghai’s economic resurgence and prosperity, with its futuristic rocket-ship design and gleaming spheres.
The World Financial Centre will now give it a run for its money. Standing a stone’s throw away from it, the new building dwarfs the Pearl. Located in Shanghai’s high-end and rapidly developing financial district of Pudong, it is across the Huangpu river from the old city.
The building’s construction has had its share of controversy. Many Shanghainese initially objected to the contract being awarded to Japanese developers — there is still significant hostility to Japan in many parts of eastern China that dates back to the Japanese occupation during the Second World War. In 2005, thousands of demonstrators gave vent to their anger in Shanghai, torching cars and Japanese businesses to protest against Japanese textbooks that they believed underplayed Japanese excesses during the occupation.
Mori did not help its cause by deciding to design the building with a circular hole at the top. Locals said it resembled a Japanese flag. The outrage reached a crescendo in 2005 when anti-Japanese sentiment in the city was already high. The builders quickly redesigned the structure: the hole at the top was reshaped into a rectangular one, giving the building the shape – and the locally popular epithet for it – of a ‘bottle-opener.’
Renting office space at the bottle-opener will not come cheap. Offices will cost as much as $3 a square metre – the highest rate in a city with exorbitant real estate prices.
Minoru Mori, chairman of Mori, told reporters on Friday he was confident that with demand for office space increasing, the rent rate would not keep businesses away. “Taking into account the business potential of the city, the total office space in Shanghai is not so large,” he said. “If you supply good space, the demand will follow.”
Judging by the initial demand, Mr. Mori appears to be right. As of Friday, 45 per cent of the space had been rented out, largely to financial sector firms.
Posted by SZri at 11:04 AM