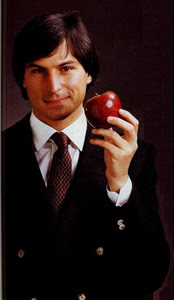 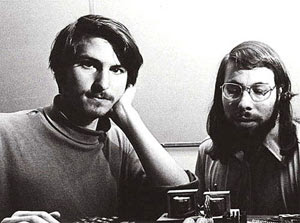 Not many know that Steve Jobs is actually a college dropout. In 1972, Jobs graduated from Homestead High School in Cupertino, California and enrolled in Reed College in Portland, Oregon. One semester later he dropped out.

He started Apple with a fellow college dropout Steve Wozniak in the Jobs' family garage in Los Altos, California on April 1, 1976. Jobs, then 21, was the pitchman, Wozniak worked as an engineer.
Wozniak said about Jobs at an Intel Corp conference in August 2008, "Every time I designed something great from when we were very young, he would say, "let's sell it." "It was always his idea to sell it."

Born on February 24, 1955, in San Francisco to then unmarried graduate student Joanne Carole Schieble and a Syrian father Abdulfattah Jandali, Steven Paul Jobs was adopted by Clara and Paul Jobs, a middle-class American couple who struggled to make ends meet. 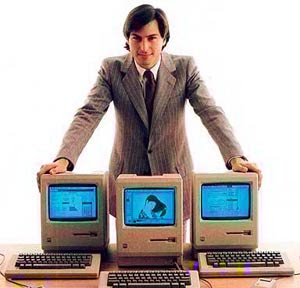 "In terms of an inspirational leader, Steve Jobs is really the best I have ever met," said former Microsoft Chairman and Chief Architect, Bill Gates in January 1998 when asked to name the CEO he most admired.

"He's got a belief in excellence of products. He's able to communicate that."

The Big boss of Apple came to India in the summer of 1974 in search of spiritual enlightenment. Jobs left for India with one of his best friends from Reed College, Dan Kottke.

Deeply philosophical, Jobs wanted to study and experience spiritualism and existentialism. In India, he wanted to visit the Neem Karoli Baba at his Kainchi Ashram. Unfortunately, when they arrived they learn't that Baba had died.

One of the most admired CEOs, Jobs draws a $1 salary. His compensation came to spotlight when the company gifted him a Gulfstream airplane in 2001. He was awarded 10 million shares of restricted stock in 2003. Interestingly, Jobs has a personal fortune worth $5.4 billion according to Forbes annual survey of the world's richest people in March 2008.

In 1985, Jobs was ousted from Apple by John Sculley, whom he brought from Pepsi in 2003, after a disagreement on how to run the company. Fortune magazine, dated August 5, 1985, with cover story "The Fall Of Steve Jobs" dwelled on the Jobs exit from the company he founded: Here's an excerpt:


"From the end of May to the middle of June, Apple reorganised in a rush, fired 20 per cent of its workforce, announced that will record its first-ever quarterly loss, saw its stock hit a three-year low of $14.25 per share, and stripped Steve P Jobs, Apple's 30-year-old co-founder and Chairman of all operating authority." 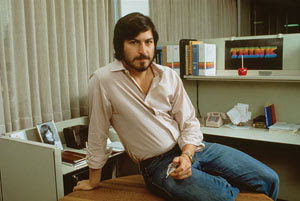 "Jobs fate aroused intense speculation. Not just another young entrepreneur, he is Johnny Appleseed of personal computing. Many insiders are shocked at his removal; they fear Apple has lost the spirit, and vision that made it into a business phenomenon. No players in the drama have explained publicly why Jobs come to grief. But several of them, promised anonymity, have revealed essential details to Fortune."
"What emerges from Apple sources is a tale of adversity -- a general slump in the PC business and disappointing sales at Mac division -- driving a wedge between Sculley and Jobs. Apple's board of directors played an important role in Job's downfall. On several occasions, beginning December, the board goaded Sculley to assert his authority over the company. Even then, Sculley put off acting partly from innate caution about organisational change and partly out of concern for Jobs’ feelings." -

According to Jim Carlton, author of 'Apple: The Inside Story of Intrigue, Egomania, and Business Blunders', Steve Jobs chose the name Apple for his company because he admired Beatles' Apple Records. Beatles first began using an image of a Green Granny Smith apple on their recordings in the late 1960s. Apple's logo shows an image of the fruit with a bite taken out of it.

The choice led to a legal battle with Beatle's Apple Corp. Apple Corps is owned by Beatle band members Paul McCartney and Ringo Starr and John Lennon's widow Yoko Ono. The two sides settled the dispute in February 2007.
Jobs and Wozniak got a share of 45 per cent each, while the remaining 10 per cent went to Ron Wayne, an Atari engineer who had given hand to the duo.

Apple had its first big success with Apple II, a machine that helped popularlise the idea of computers at home. Apple sales rose from $7.8 million in 1978 to $117 million in 1980, the year Apple went public. And, by age 25, Job's was a millionaire.

Mac surpassed the success of Apple II. It was the first successful PC built around graphic user interface. Mac used icons and a mouse to allow users to pint-and-click programmes. The GUI was later adopted by Microsoft in its rival Windows.
Mac became a fashion statement among graphic artists and students

Out from Apple, Jobs, then 30, started NeXT Computer Inc. The company developed a computer rival to Mac and PCs powered by Intel chips and Microsoft's Windows software.

Though NeXT computer won admiration for its technology prowess, the company failed to create a ripple in the market when it came to product sales. The NeXT's machines kept losing money and in 1993 Steve was forced to abandon NeXT's hardware operations.

In 1986, Jobs bought the computer division of film director George Lucas' Lucasfilm Ltd for $10 million. He named the computer animation studio Pixar, and signed a distribution deal with Walt Disney.

As the CEO of Pixar animation studios, Jobs promoted computer-generated story telling with movies including Toy Story, Finding Nemo, A Bug's Life and Monster Inc. The movies were a huge success and Jobs decide to take the company Public in 1995. He was back in business.
In 2006, Disney bought Pixar for $8.06 billion. Job was Disney's largest shareholder and got a seat on their board.

In 1995, Apple Computer was at its lowest point in history. The company was facing tough competition from Microsoft. Apple's CEO, Gil Amelio, was desperately looking for a way to save the company. In December 1996, Amelio bought NeXT for $400 million and welcomed back the company's founder, Jobs, as an 'informal adviser'.

Within eight months of the acquisition, Amelio was out and Steve Jobs became Apple's interim CEO. Jobs returned to the company after Apple had losses totaling $1.86 billion in a two-year period. As part of the turnaround, Jobs unveiled an unprecedented partnership with Microsoft CEO Bill Gates in August 1997, who invested $150 million in Apple. Apple on its part included Internet Explorer browser on the Mac.
However, Jobs' biggest coup came in May 1998, when he unveiled iMac. iMac combined computer and monitor into a single unit. A stunning success, iMac helped revive Apple sales and remains one of the biggest money makers. In 2007, Mac accounted for 43 per cent of the company's revenue.
In October 2001, Apple unveiled its first iPod, the digital music player further galvanised the company's position in the market. The portable music players continue to dominate the global market.
Few know that Steve Jobs is a Buddhist and a vegetarian. Jobs has never named a successor. He told shareholders in March 2008 that the board would have a variety of executives to choose from when he steps down due to any reason. He singled out two potential leaders: COO Timothy Cook and CFO Peter Oppenheimer. Cook stood for Jobs during his leave in 2004

In January 2007, Steve Jobs introduced iPhone, Apple's state-of-the-art mobile phone. With iPod and its accessories, Apple TV and the iPhone, it became clear that Apple is no longer a mere computer company. Hence, went the term `Computer' from its official name. On January 7th, 2007, Jobs announced that Apple Computer Inc has become Apple Inc.

Apple iPhone hit the market in June 2007. The device got updated this year and has been introduced in 22 countries across the globe. The second-generation iPhone runs on 3G network and supports business email system


The tech czar is also probably the only corporate honcho to have the displeasure of reading his own obituary, which was fired by financial newswire Bloomberg to its subscribers.


Had the man who reinvented Apple Inc, and just about every rule in the game of personal electronics with iPod, and then in telecom with iPhone, finally lost his battle with pancreatic cancer?
No, the man was alive and kicking even as a red-faced Bloomberg -- usually sharpshooters when it comes to financial news -- had missed the mark by miles.
The gaffe happened when the American agency decided to update its 17-page stock obituary on Steve Jobs, and someone accidentally published it in the process. The story, which was meant to be sent to Bloomberg's internal wire, accidentally slipped out to its subscribers. And all hell broke loose!
The story that ran 'Hold for release' - 'Do not use' couldn't actually have been stopped as it was simply too big for global financial markets. The jitters subsided later when the agency promptly retracted it.
Posted by SZri at 2:50 PM

It is nice to know that there is life after dropping out of college. Some students get frustrated after they do, but there is a lot more beyond education.

Check out the YES movie by Louis Lautman at www.TheYESmovie.com. See how the nation's young entrepreneurs become successful.

Hey ! Genuinely it’s really possible to earn money online; I really felt that this website is quite impressive and a great idea to earn hundred’s of Dollars daily.