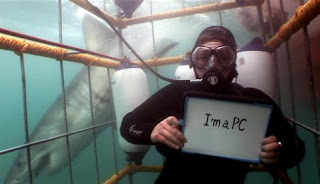 
After two weeks of three teaser ads "about nothing" featuring Microsoft co-founder Bill Gates and comic Jerry Seinfeld, the company launched a new TV ad that directly addresses the long-running Apple campaign that personifies its Mac as a young, hip guy and a Windows PC as a clueless geek.
The commercial opens with a real Microsoft software designer who looks like the PC character — and is dressed to match: "Hello, I'm a PC," he says, "and I've been made into a stereotype."
The ad then cuts to a series of upbeat "I'm a PC" testimonial clips of PC users doing what they do, including a shark-cage diver, a fishmonger, a fashion designer and celebrities such as actress Eva Longoria.
That ad and others to come will showcase the "diversity" of Windows users, says David Webster, Microsoft general manager of brand and marketing strategy.
"Our competition would have you think that PCs aren't interesting and interesting people don't use them," he says. Microsoft had "to take back the PC brand and tell the truth about it."
Webster says he's not worried about reinforcing a negative image by mimicking a character and tagline created by its nemesis. "The overwhelming bulk of the ad" showcases a wide range of personalities, he says.
Other elements will include print, outdoor and online ads.

Microsoft also will tap "consumer-generated content." Starting Thursday night, PC fans could upload "I'm a PC" testimonials, including photos and videos, at Windows.com. Microsoft will use select images on a Times Square video billboard, feature them in online banner ads and post them on Windows.com.
The new ads come two weeks after Microsoft launched the offbeat teasers with the unlikely pairing of Gates with Seinfeld. The TV spots — which have no clear plotline or overt Windows branding — showed them living with a suburban family and shopping at a discount shoe store. Those ads were meant to be an "icebreaker," Webster says.
But mixed reviews from bloggers and ad pros stoked Web rumors Thursday that the new ads meant Seinfeld had been fired.

That speculation is completely off-base, says Webster. "We needed to move on and start to talk about Windows," he says. "We're ready for chapter two."
They "don't have any plans" now for more Seinfeld ads, but Webster wouldn't rule out it out. "Down the road, it wouldn't surprise me. … He really hit it off with Bill (Gates.)"
Posted by SZri at 3:00 PM