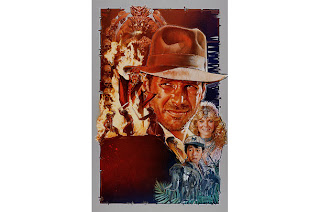 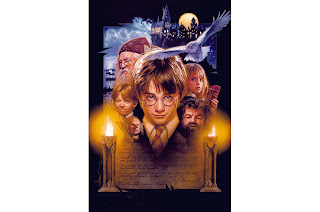 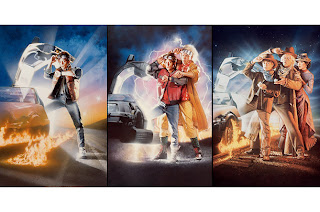 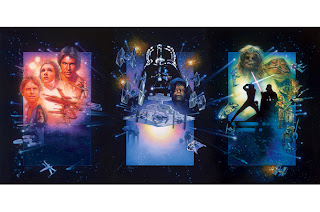 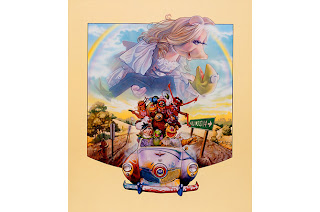 INDIANA JONES AND THE TEMPLE OF DOOM, 1984


Drew Struzan has painted many of the most iconic movie posters of the last three decades, including those in the Star Wars and Indiana Jones series. On the occasion of his retirement, he spoke about his most memorable work:

I did all four Indy movies and that was probably my favorite one. With Temple of Doom, someone else did the initial poster and they weren't happy with the way the film opened. So they contacted me, I did one drawing, sent it north to George [Lucas] and he said, "Perfect, paint it." Probably within a week after the movie opened, they had a new poster. After that, in George and Steven [Spielberg]'s mind, I became the Indy artist.

HARRY POTTER AND THE SORCERER'S STONE, 2001


A lot of people think I did all of the Harry Potter posters, but I only did the first. The studio came to me and said, "This is going to be seven movies. So just like you did with Indiana Jones, design the look for it, and then we'll just repeat that look for the other films." I did the first one, and when they hit the theaters, people just clamored for it. But when the second movie came out, they decided to just use photography. It's a fine example of how things have changed.


We went through a lot of original drawings for the first movie until Steven Spielberg was pleased. For the second one, we went through 30 or 40 ideas and they couldn't make up their minds for a long time. Finally, they said, let's just repeat the pose from the first one. It's never easy in Hollywood.


The process with that movie was quite the opposite. I went to lunch with an art director and he had an idea that he drew on a napkin, believe it or not. He said, "This is what we want." And I just went home and painted it and that was that. Some of these movies I've never seen. I'm just looking for the spirit of the thing. I flip through the book of still photos, and that's like watching a movie frame by frame. I see all of the themes and the design and the colors.


That was an extreme case, that John Carpenter remake. They called me on the phone and said, "We're re-doing The Thing. It's the same story as the first movie, more or less. So send us a drawing." I didn't see anything on the movie. I didn't read the script, I didn't see the stills, I had nothing to go on. So that one was more generic than anything else out of necessity. It took one day and one night to do the whole project.


While they fit together perfectly in a triptych, they were never painted side by side. I basically had a week to finish each. I put a black border around each one and had everything breaking out of the frame to make it look grander than it actually was. George liked it so much that he wanted the rest of the Star Wars posters to match that. So, on Episode I, and II, and III, I repeated that concept. George has a wonderful screening room at Skywalker Ranch, and there's this big wall with all six paintings lined up in order. It's one big movie.


That was another one of those toughies where the movie came out and they still didn't have a poster. They had done an advance poster which was just a hook, and that's what they used to open the movie. Once I painted it, it came out a week or so after the film. Robin Williams loved his portrait. Dustin Hoffman didn't. So I go to his house and he comes to the door in his bathrobe and he has a half gallon of ice cream in his hand. I go in and he just starts acting for me. "This is the kind of face I want on the poster."


Frank Darabont and I worked together on The Shawshank Redemption and The Green Mile DVD special editions. When he started making The Mist, he said, "If we're going to have an artist in the film, let's use the best one we know, and that's Drew." All the paintings in the first scene, including this one, are mine. As a tribute to Stephen King, Frank wanted this painting of The Dark Tower. The only place it's ever been used was in that movie, but I still get hundreds of emails from people asking, Where can we get that poster?


I did the original painting for that back when Blade Runner was about to come out. There was another painting, by John Alvin, that had all the buildings and stuff. I think the studio wanted to show how much money they had spent on special effects, so they went with his. But when it came time to do the Special Edition, Ridley Scott says, "I want to finally use this art." At the time, he had just released Gladiator, and it became such a big hit, that he put the re-release off. But they finally used it after 25 years. That was a long time.


Good ol' Jim [Henson]. I sure miss him. My first trip to New York City was to work on The Muppet Movie. I met with Frank Oz and we had a photo session with Piggy and Kermit. It was the greatest experience ever. It was like a dream, what you would want Hollywood to be. From then on, Jim said, I was the only one he would allow to paint the Muppets while he was alive, because I made them look how he wanted, like real people.