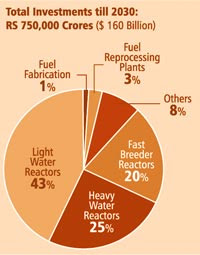 The last few weeks ran out like a fast-paced thriller on the nuclear power front that dwarfed and relegated other news items into the inside pages of newspapers. For once, New Zealand mattered, and it was not in cricket. The race is not over as yet: as we speak, the US Congress is deliberating legislation on India-US agreement that would end our 34-year isolation from the rest of the world in nuclear and many cutting-edge technologies. Already, it is reported that global nuclear power companies have begun canvassing in the country for a share of the emerging Indian nuclear power reactor market.

Nuclear power is just one option for generating electricity. Before we embrace it, it may be worthwhile to examine the following questions: How relevant is nuclear to our electric power sector? How important is this agreement? How much additional capacity can we add with this? And, how should we plan for such an expansion? We have examined some of these issues in detail in a recently published report from our Centre: (www.cstep.in)

Today, nuclear contributes about 4,120 Mw (3%) out of the total installed capacity of 140,000 Mw. Our targeted economic growth of 8-9% requires the generation capacity to increase at least five times to 800,000 Mw by 2030-40. Energy sources such as hydro, wind, biomass and natural gas, even if exploited fully, cannot contribute more than 25% of this. We could, of course, continue to build more coal-fired plants. However, the present annual coal production of 400 million tons would have to increase six-fold! Even our economically extractable coal reserves could well run out in about five or six decades. Already we are importing coal and these would only increase. Moreover, burning coal is not clean: every kWh of coal-based electricity comes with 1 kg of CO2. Therefore, large-scale nuclear power is crucial for our long-term energy and climate policy, at least until solar power becomes commercially viable.
How does nuclear power grow from today’s 3%? In the absence of international co-operation, even in an overtly optimistic scenario, nuclear capacity could increase only to about 26,000 Mw by 2030, still a 3% of the total. This limit is imposed by our limited uranium reserves, which can last only for four or five decades. Even the currently operating reactors that are of the Pressurised Heavy Water type (PHWR) are affected from fuel shortage and some are reported to be operating at only about 50% capacity. With international agreement and imported uranium, these reactors should operate at their designed capacities. It should also be then possible to build more PHWRs beyond the planned 10,000 Mw. The Indian atomic energy establishment has all the experience and expertises for building this class of reactors.

These reactors are useful not only for generating more electricity, but also for producing plutonium, the fuel for India’s breeder programmes. Plutonium does not occur in nature and has to be extracted from spent nuclear fuel rods discharged from the PHWRs. One ton of spent nuclear fuel, after reprocessing, yields a mere four kilograms of this metal. Using plutonium as fuel, Indian scientists plan to build a number of fast breeder reactors (FBR), for which they have, over the years, built enviable expertise. All these require adequate capacity for fuel reprocessing. The present capacity of a few hundred tons has to be augmented to over a few thousand tons. We should also be able to import plutonium or send the spent fuel abroad for reprocessing. France has a large and surplus capacity for reprocessing fuels. We should also focus on the development of the high breeding FBRs, which produce more plutonium than they consume. The thorium program would have to wait for several decades, until sufficient plutonium is recovered to transform thorium into a fuel that can be used in the reactors. Meanwhile, we can rapidly augment capacity by importing light water reactors (LWR) from countries such as France, Russia and the US. It is possible to add about 32,000 Mw by this route till 2030. Plutonium recovered from the spent fuel from these reactors can also be used to add more FBRs. Our study estimates that if we do all these, the nuclear power can go up to at least 70,000 Mw by 2030 (10% to the total), and perhaps 280,000 Mw by 2050 (25%). With a large-scale availability of plutonium, nuclear power has the potential to provide long-term energy security.
The country’s nuclear landscape will be rapidly transformed. A large number of reactors, fuel reprocessing plants, fuel fabrication facilities and waste immobilisation plants will all have to be built almost simultaneously. Nuclear power may very well turn out to be the engine for India’s next Industrial Revolution. This would not happen easily and needs commitment and active participation from the government and various sectors of the national economy. Sites have to be selected, designs have to be approved for safety, very large investments have to be made, and skilled human resource base has to be rapidly built.

Our study estimates that the nuclear power sector requires a total investment of about Rs 35,000-40,000 crore per annum or a total of Rs 750,000 crore over two decades ($160 billion). Imported LWRs constitute almost half of this. International experience suggests that capital cost of a 1,000 Mw reactor is likely to be $2-3 billion. The cost of electricity thus works out to Rs 3.2-4.3 per kWh. This may sound more expensive when compared to coal, but falls well within the range of new power plants operating in the country. Carbon credits, once implemented, would make the cost of nuclear power more attractive.
Even imported reactors need active participation from indigenous industry: ancillary equipment, civil works, forgings, electronics, computers and other engineering equipments would all have to be built indigenously. Indian industry should be looking at a market of at least Rs 300,000 crore over the next two decades. The manufacturing base of existing engineering companies would have to increase several times to meet this and they should plan for it now. India will need many more Larsen & Toubros and Bharat Forges. Though fuel reprocessing plants constitute a mere 3% of the total investments, it is essential that we build these plants on priority. Otherwise, the breeders cannot take off. The government should initiate steps to amend the Atomic Energy Act to allow the participation of private industry (and also public sector organisations) in building reactors.

We would also need a few lakh professionals, skilled and semi-skilled workers, both for construction and operation. In addition to the Department of Atomic Energy’s training schools, several universities and polytechnics would have to run special courses in nuclear engineering and manufacturing technologies. This would be a welcome development, better than building more and more colleges with very little focus.
The nuclear agreement, when signed, will present India with enticing opportunities for building its long lasting energy repertoire and industrial growth. It will be a tragedy, citing one imagining or another, if the country lets go of it.

The authors are associated with Center for Study of Science, Technology and Policy (CSTEP), Bangalore
Posted by SZri at 6:13 PM