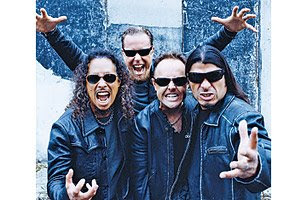 Metallica's new album, death Magnetic, will have you chuckling in disbelief--a completely normal response to heavy metal. Even those of us who can't resist a good power chord have to concede that metal is a genre rarely burdened by self-awareness, which explains why Ozzy Osbourne will remain its spiritual leader for as long as he stumbles the earth. Spinal Tap is nearly 25 years old, yet bands keep naming themselves after torture techniques, and guitarists still wield their instruments like six-string phalluses. It's music that literally dares you not to mock it.But title aside, Death Magnetic is no joke. Large segments of the album move with a velocity and precision that have no precedent. Let's repeat: no precedent. It's as if Metallica was determined to prove that on its ninth album it could do everything it did in its early-'90s prime--a prime that brought heavy metal as much critical acceptance and commercial success as it will ever receive--only several times faster and with more feeling. The songs fly by with the force of the world's angriest amusement-park ride, and when they set you down, often after seven or eight dizzying but tuneful minutes, giddiness is the only appropriate response.


Joy of this or any kind has been largely absent from Metallica's recent history. The group's last three records were marked by infighting and an edge of uncertainty, as if the band members--who are smarter and more sensitive than their facial hair might lead you to believe--were embarrassed by mere excellence as a metal group but unsure how to expand their emotional and thematic range. I met James Hetfield, Metallica's imposing singer and rhythm guitarist, shortly before the release of 2003's St. Anger and a week after I got engaged. Hetfield offered congratulations and joked, "Feel free to use Enter Sandman as your wedding song." Then he sighed. "One day we'll write something people can celebrate to." It was not surprising that St. Anger turned out to be weighed down by its pretensions, the musical equivalent of a sportswriter's novel.
To get itself out of the decade-long fog, Metallica jettisoned longtime producer Bob Rock and turned to Rick Rubin, bearded sage to everyone from the Beastie Boys to the Dixie Chicks. Rubin told the band to stop trying to evolve and instead to devolve, to embrace its early thrash sound and improve it. He also encouraged the group to make longer songs, a key tactical decision. Death Magnetic's best track, Broken, Beat & Scarred, has a chaotic, minute-long intro that never telegraphs the melody line to come. It keeps bobbing and weaving until the 3:30 mark, when, just after Hetfield barks, "What don't kill ya make ya more strong," all four band members drop the clutch and play as hard and as fast as they can--without sacrificing the clarity of a single note. The result isn't a wall of sound so much as a giant barbed-wire fence.

Creating nuance on a runaway train is an impressive trick, and Death Magnetic does it in part by reaching back to jazz. Drummer Lars Ulrich's father played with Miles Davis and was the proprietor of Copenhagen's Blue Note club, but it's the dialogue between Hetfield and lead guitarist Kirk Hammett that feels the most improvised. On My Apocalypse, the guitars (most of which were recorded live) tussle and throw off sparks, egging each other on. The End of the Line builds to another duel that appears to resolve with a Hammett solo--until the guitars reunite and a whole new melody erupts.
Lyrics? Well, they're mostly about rage and redemption, and if you fail to find meaning in them, fair enough; not everyone needs 80 minutes of anger management. But the sound of a band playing better than it ever has ought to bring a smile to your face. It certainly earned my respect.
Posted by SZri at 10:06 AM